Sun, sand and sea: a timeless recipe, readily available throughout the Caribbean. But sun, sand, sea — and city? Visit Jamaica to indulge in that one. Sure, the resplendent island has a range of resort areas where one can merrily get one’s beach-bum on. But it’s also got Kingston, a woefully underrated, misunderstood metropolis. Yes, there are slums and there is crime. But there is also cosmopolitan culture, pulsating night life, a booming local music scene and a host of other urban delights. With a new airline (Fly Jamaica), a 130-room Marriott under construction in the island’s capital, modish-yet-playful new lounges in both international airports (Club Kingston and Club Mobay, decked out in sprightly Jamaican colors) and restaurant openings across the island, it’s an ideal time to take a side of city with your sand, and heed the tourism board’s Bob Marley-inspired mantra, trite yet spot on: Come to Jamaica and feel all right.

Just after touching down in Kingston, pay homage to that most-revered Jamaican. No, the other one: the one who runs, not sings. Usain Bolt’s Tracks & Records is a restaurant, sprawling sports bar (with more than 45 TVs, including a 20-foot one) and ultracool shrine to the fastest man alive, complete with Brand Bolt products for sale. The menu is a mix of classic Jamaican dishes, like roast fish and viscous red pea soup, and funky remixes, like jerked chicken quesadillas and the “jam Asian Cobb salad.” Lunch will come to about 1,200 Jamaican dollars, or $11.40, at 105 Jamaican dollars to the United States dollar. (Almost all businesses in Jamaica accept local or United States currency; they may charge in one or another, but accept both.) Look for the monthly “Behind the Screen” concert series, which features big-name reggae artists, unplugged.

Kingston is the mecca of R&R. That’s reggae and Rastafarianism, two of the Caribbean’s most monumental cultural movements. Get a crash course in them, along with a snapshot of Jamaican history, flora and arts, at the sundry museums that make up the Institute of Jamaica in historic downtown Kingston, near the waterfront. There’s the National Gallery, which nicely fuses classic Jamaican art with avant-garde exhibitions; the Natural History Museum; the Jamaica Music Museum; and Liberty Hall, which honors the back-to-Africa pioneer Marcus Garvey in the original headquarters of his Universal Negro Improvement Association ($5 admission for adults).

Surprised that concrete-jungle Kingston is so beautiful? Be triply surprised as you watch the sun set in shades of ginger over the majestic Blue Mountains while sipping a martini at Sky Terrace, on the roof deck of the chic Spanish Court Hotel. The SoHo-style 107-room hotel, which opened in 2009 as the first new hotel in Kingston in over three decades, has steadily improved, adding a rooftop spa, an eclectic gift shop and, later this year, a modish wine bar. 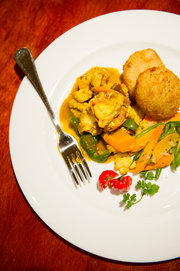 Lobster curry at 689 by Brian Lumley.CreditDiana Zalucky for The New York Times

Call him Jamaica’s Jamie Oliver: 27-year-old Brian Lumley, former chef to the French ambassador and the face of several local brands, is perhaps the island’s most talked-about celebrity chef. His new restaurant, 689 by Brian Lumley, sits in the heart of New Kingston, the tourist-friendly hotel hub. Its specialty is pasta with West Indian flair: pesto and lobster, jerk chicken linguine and conch penne. (Dinner, about 7,000 Jamaican dollars for two, with wine).

Kingston’s specialty isn’t nightcaps, it’s bashments: outré pre-dawn-till-daylight dance hall parties, where the bass line thumps in chockablock clubs or at crowded street dances. But there’s now an exception to that. The Regency Bar and Lounge at the newly refurbished Terra Nova All-Suite Hotel is an upmarket oasis, with plush velvet lounges and gold-accented décor, with a bar menu to match: duck pizza, curried-lamb or jerk-pork sliders. Best part of the menu: 50-year-old Appleton rum, a local delicacy (wines from $6; cocktails from $5; no door charge).

Don’t close your eyes for a quick nap on the morning ride to “country,” as Kingstonians call any region outside the capital city, lest you miss breathtaking vistas. The two-and-a-half-hour drive from Kingston to Ocho Rios (“Ochi” for short; calling it “Ocho” will imprint “tourist” all over you) is an Instagrammer’s delight: lush greenery, ruby-colored earth and impressive mountains. Eat a freshly cooked breakfast along the way at Faith’s Pen, an illustrious strip of simple wooden stalls peddling the full gamut of Jamaican delicacies: roast corn and breadfruit (fruit that grows on a tree), callaloo (Jamaica’s take on collard greens), lychee-like ackee and salt fish (the national dish, which has the look and texture of scrambled eggs, sautéed with peppers and codfish flakes) and fresh cane or mango juice (about 700 Jamaican dollars per person for breakfast). 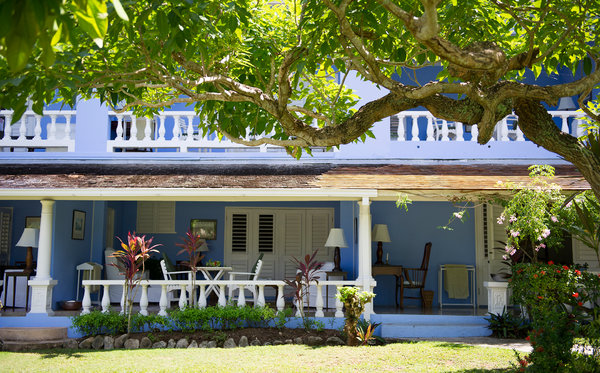 Rooms at the Jamaica Inn. CreditDiana Zalucky for The New York Times

The humble name belies its splendor: the Jamaica Inn opened in 1950 as a petite, well, inn. A honeymooning Marilyn Monroe and Arthur Miller were once among its guests, but the property is now a grand yet quite homey haven. Leave your bags at the front desk (check-in time is 3 p.m.) and collect your mallets. Yes, mallets. By the beach is a charming croquet lawn, perfect for a late-morning match. Follow it up with an afternoon swim in what’s arguably Ochi’s most immaculate beach: white sand, supernaturally cerulean waters and a backdrop of waves striking rugged cliffs.

Jerk chicken is a Jamaican culinary cliché. Eat it in its birthplace, however, and taste transcends trite; here’s the real deal. With four locations across the island, Scotchie’s is an ever-popular temple to all things jerk: pork, chicken, sausage and fish, dry rubbed and marinated in a mix of allspice, cloves, cinnamon and nutmeg, then grilled on pimento logs, lending the meat an inimitable hickory flavor. Seating is on picnic tables under palapas, which all but demand a Red Stripe (lunch is about 1,300 Jamaican dollars).

It would be utterly juvenile if it weren’t so much fun: Pretend you’re starring in the 1993 Disney film “Cool Runnings,” which pays homage to Jamaica’s 1988 Olympic bobsled team, by whooshing through a lush landscape on a Jamaican-flag-colored bobsled ride. It’s one of many attractions at the Rainforest Adventures park at Mystic Mountain; there’s also a pool and waterslide, butterfly and hummingbird gardens, canopy zip line and the SkyExplorer, a sort of ski lift suspending you 700 feet above luxuriant vistas (at $137.50, the Jamaica Tranopy package includes the bobsled, zip line and SkyExplorer).

A common word in Taino, the language of the island’s original inhabitants, is “KiYara,” which means “sacred place of the earth spirits.” Formerly named KiYara Spa, Ocean Spa at the Jamaica Inn has the feel of a bamboo treehouse suspended over a serene sea. Go for the 4-Hand Bliss Massage, during which two therapists working in tandem extract all lingering tension from your body.

“Jamaica” comes from the Taino word for “land of springs,” and for good reason: the island abounds in rivers and waterfalls. Dunn’s River Falls is the Disneyland of them: 600 feet of falls and lagoons, a set location for “Dr. No,” site of a 1657 battle between the Spanish and the English — and almost always overrun by tourists. Except, that is, during the early morning hours. So rise with the sun, enjoy an elegant breakfast on the oceanfront veranda at Jamaica Inn, and let the hotel ferry you directly to and from the falls, for your own private basking in the natural splendor ($110 for two).

En route to departure from Montego Bay (Ochi is just about equidistant from the island’s two airports) stop in Falmouth, in the parish of Trelawny. It’s home to a $220-million cruise port that opened in 2011, but the real attraction is much older. As one of the Caribbean’s best-preserved Georgian towns, Falmouth has a historic district containing a sizable, nearly intact collection of British Colonial architecture. Schedule a free walking tour that goes through churches, a courthouse and the post office with Falmouth Heritage Renewal, dedicated to preserving and restoring the district’s architecture and history; the charity also has a slave museum in the works, at the former home of a British emancipator.

Correction:
The 36 Hours column last Sunday, about Jamaica, and the accompanying map, included an outdated name for the spa at the Jamaica Inn. It is Ocean Spa, not KiYara Ocean Spa. A corrected map can be found at nytimes.com/travel.
Correction:
The 36 Hours column on March 30, about Jamaica, described breadfruit incorrectly. It is a fruit that grows on a tree; it is not a dense root vegetable. (In general, it is propagated using root offshoots or root cuttings.) A reader raised the point in an email in March. This correction was delayed because editors at The Times initially decided that a correction was not warranted.